At the end of the 40s and beginning of the 50s, disillusioned young people and WWII veterans found themselves a common passion: the motorcycle. A changing society, the birth of Rock ‘n’ Roll and the emergence of local radio stations provided fertile soil for gangs with a rebel spirit, living a life where alcohol flowed freely and the evenings usually ended in a brawl. While Norton, Indian and Triumph were widely liked motorcycle brands, it was Harley Davidson that would become the bikers’ favourite brand in just some years. 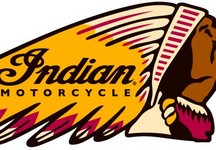 The Hells Angels club was founded in California in 1948, and would acquire international fame, notably by doing the security for the Rolling Stones during their tour of the United States. Other biker groups would be created, with branches outside the USA, such as the Pagans of Maryland and, in 1966, the Bandidos, which would count over 2000 members. Some of these groups would quickly radicalise, adopting a neo-Nazi ideology and clashing with rival gangs over control of arms and drug trafficking territories.

The bikers listened to Rock ‘n’ Roll, and later Hard Rock and Heavy Metal, bands like Motörhead, Juda Priest, Black Label Society  and Steppenwolf with their famous hit “Born to be Wild”. The television series Sons of Anarchy, with 7 seasons and 92 episodes, offers a fairly accurate portrait of biker culture in the US.

In France, it was Johnny Hallyday who would popularise the clothing style of the rebel biker: a Harley Davidson t-shirt, jeans or leather trousers, a fringed waistcoat or studded leather biker jacket covered with “1%” badges and cloth “Live to ride” patches. On the feet, a pair of leather boots or cowboy boots. The more radical bikers have their arms tattooed and let their beards grow long. For accessories, a pair of sunglasses, a bandana and a pair of leathergloves complete the look. More recently, hipsters have claimed the biker dress codes for themselves and made them mainstream.

The New Rock catalogue offers an exceptional selection of boots and motorcycle boots for men and women, in black or vintage brown leather, plain or decorated with chains, Maltese crosses or skulls, with flat or platform soles and metal heels. It also offers collections of ankle boots and cowboy boots, designed and crafted in the great American and Mexican tradition, made in leather and genuine python skin, as well as high-tops inspired by the shoes worn by gold-seekers.

Whether you’re a hardcore biker, a hipster or simply want to draw inspiration from the Hells Angels’ look, you will find a model of shoes or biker boots to best suit your style.