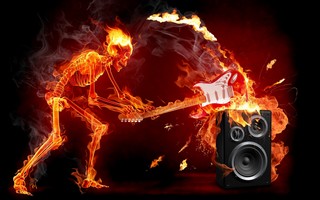 While the Rock ‘n’ Roll that appeared in the middle of the 50s would become a global movement in under a decade, certain British and American bands adopted its rhythms and added saturated guitar riffs, a more powerful set of drums and shrill voices. We can think, in particular, of the Rolling Stones and The Who, which would lay the foundations for something that was to become Hard Rock. From the 70s, this style of rock would experience global success thanks to bands like AC/DC in Australia, Scorpions in Germany, Deep Purple, Led Zeppelin, and Van Halen, to mention just a few. Hard Rock peaked in the 80s and would lead to the birth of subgenres, from more accessible genres like Pop Rock to heavier subgenres such as Heavy Metal. Some tracks would become classics: “Highway to hell” by AC/DC, “Smoke on the water” by Deep Purple, Joan Jet’s cover of “I love rock ‘n’ roll” and “Walk this way” by Aerosmith. It’s almost impossible to speak of Hard Rock without evoking Heavy Metal. The differences are so minimal that some don’t see differences at all and use the term ‘metal’ for all hard styles of rock.

It may seem like a caricature, but the idea we usually have of a metal look can be summed up in a black, studded leather jacket, a skinny jean, a t-shirt with a Metallica or Iron Maiden print, a pair of motorcycle or cowboy boots, and above all long hair. For accessories, you don’t need much more than a wide belt, a studded wrist band and a bandana. It’s a look loved by girls and guys alike, and you can find the same look among bikers and punks.

New Rock, leader in the field

New Rock leather boots are known for their unmatched style, craftsmanship and finishings, loved by hard rock aficionados. The brand’s catalogue is full of boots, motorcycle boots, military-style Rangers and low and high cowboy boots. We have boots in classic lacquered or vintage leather, but also embroidered or with metal inserts, skulls and Maltese crosses. There is also a wide range of options for the girls in the collections of ankle boots and very stylish pumps, with a metal high heel or needle heel.