Imagine a futurist world in the style of Jules Verne, where technology stopped with the steam engine. This is the universe of Steampunk, a combination of ‘steam’, referring to its specific technological inspiration, and ‘punk’, the libertarian movement of the 70s. While most countercultures are born out of movements or bands, we find the origins of the word ‘steampunk’ in the literature of the 80s, specifically in the works of K.W. Jeter, Tim Powers and James P. Blaylock, who were looking for a term for what they called ‘Victorian fantasies’. In fiction, it is called uchronia, the rewriting of history starting from an event or period in the past, of which Terry Gillian’s movie Brazil is probably one of the best cinematographic examples.

There is not, properly speaking, a musical genre of Steampunk, in contrast with Goth or Rock, but certain artists can be considered as part of the movement: Dr Steel, Abney Park, Vernian Process, and later EZ3kiel, Lost Horizons and Caravan Palace. 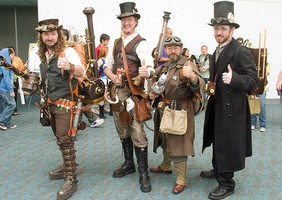 The steampunk universe is made up of zeppelins, mechanical robots or rather automatons and unlikely steam engines. But what is even more remarkable is certainly its own unique style of dress which would develop from the 90s onward, inspired by Japanese cosplays. Everyone creates a look for themselves according to their own preferences, based on their sources of inspiration and the personage that they desire to portray, digging through their wardrobe and trunk of accessories. A bourgeois look with a long, corseted dress, choker, thigh-high boots and bowler hat, or more of a steam train driver look with baggy trousers, a white shirt, a pair of Rangers and goggles on the forehead. Guys generally wear a top hat, a leather waistcoat decorated with a pocket watch, pleated trousers and a pair of vintage brown leather boots.

The emphasis is on the accessories and the jewellery: leather fingerless gloves, gasmasks, a compass, goggles in the style of WWI aviators and fantasy jewellery: pendants, brooches, rings and bracelets, handmade out of repurposed objects: gears, watch and clock mechanisms, parts of old tools.

New Rock and the Steampunk look

As the adherents of steampunk fashion are inspired by numerous styles, they can find shoes or leather boots that suit a neo-retro look in all the collections of the New Rock catalogue, for men as well as women: high tops in Western style, boots with platforms, ankle boots with high heels or platforms, all depending on the style you’re going for. The Zueco collection of mules or the Neotrail ankle boots are completely in the spirit of the Steampunk movement. You’ll find city shoes which can be worn every day, and other, more eccentric models, ideal for a convention or a fancy-dress event. The highest quality leather as well as the craftsmanship of the shoes have built the reputation of the New Rock brand all around the world.